Luke’s genealogy of the Christ starts with Jesus, son of Joseph, and works its way all the way back to Adam. It ends with these words: “…son of Enosh, the son of Seth, the son of Adam, the son of God.”

In what sense was Adam the “son of God?” I do not know all of the ways in which that question cab be appropriately answered, but I know one thing: our children tend to resemble us, and Adam resembled God. Scripture says that when God made Adam He said “let us make Adam in our image,” or “in our likeness,” or, in some sense, “to look like US.”

Of course in Hebrew, Adam literally means “mankind,” and this is no coincidence. Just as Adam is a child of God, and thus “looks like” God, so all of mankind are children of God, who look like Him.

Plenty of other scriptures reaffirm this. Paul said of his prayer life: “I bow my knees before the Father, from whom every family in heaven and on earth derives its name.” So in some sense, not only are we His children who resemble Him, but we also have His name, just as it is customary even to this day for a person’s children to bear their name. In His sermon on Mars Hill Paul proclaimed that God “made from one man every nation of mankind to live on all the face of the earth… for in Him we live and move and exist, as even some of your own poets have said, ‘For we also are His children.’”

Now when we get into trouble, who do we turn to to bail us out? Often, it is our family. This is the way it has been for millennia. In the book of Ruth, for instance, Boaz redeemed the household of Naomi because He was one of their closest relatives. In fact, in Hebrew, the word for “redeemer” and “close relative” is the exact same word.

No wonder then, that God Himself ended up being our redeemer, for ultimately there was no one else in the family who could help us with our sin problem. We were slaves to sin as Romans teaches, and slaves to the law, as we read in Galatians 4:5, and as the law in the Pentetuech lays out, a man needs one of his kinsmen to pay out the redemption money before he can go free. We might have hoped for a fellow human being to help us out, but the Revelation to John tells us that they searched through heaven, and found no one who was worthy except the Lamb. He was our closest and only kinsman who could bail us out.

Thus we are told by Matthew and Mark that the Son of Man (a title of Jesus that really emphasizes His kinship to us) came to give His life as a ransom for many.

So what do we learn from all of this? Well, we learn that there is no “us” vs. “them” when it comes to the worth of the various peoples on the earth. Yes, we have different skin colors, and we speak different dialects and different languages, and we have different customs and traditions and heritages and strengths and weaknesses. And there is no need to hide these facts. Rather, I think we should celebrate them. But when it comes to whose family is better than whose, there is only one family. We are all sons of Adam, sons of God. We all look like Him. We all carry His name.

Maybe sometimes those in power want to divide us into groups, and foster hate between us in order to make us easier to control. Or maybe sometimes it has little or nothing to do with those in power, and it starts at the bottom and works its way up because we, as humans, are distrustful of those who are not like us, or who we perceive as a threat to our own way of life. But when it comes to human worth, there is no “us” and “them.”

There is, however, a very important “us” and “them” that does need to be addressed. It is the “us” who accept Him as our redeemer and the “them” that reject His sacrifice in favor of some other god. It might sound discriminatory, but truly, there is a group that is special in His eyes. He calls them “a chosen race, a royal priesthood, a holy nation, a people for God’s own possession.”

This special people is his church. And while many today perceive His church as being bigoted precisely because they perceive it as an elitist group who think they are better than others and exclude those who are different from them, the truth is that the requirements for entry still leave room for quite a bit of diversity.

You do have to trust and obey.

Matthew 25 describes a scene in which God “separates the sheep from the goats.” There will be “sheep” and “goats.” There will be an “us” and a “them.” Both “us” and “them” will have “red,” “yellow,” “black,” “brown,” and “white,” rich and poor, old and young, men and women among our numbers. Both “us” and “them” will have those who had our own struggles with alcohol, drugs, sexual immorality, and a host of other problems. But “we” will be faithful to Him wherever He leads, while “they” will turn their backs on Him when the right idol comes along.

This is the only “us” and “them” that will matter in the end.

I will stand with you in this life. But when judgment day comes, there will be a separation. On that day, will you be one of us, or one of them?

When Nathan came to David as recorded in 2 Samuel 12, he came to a man guilty of lust, adultery, reckless endangerment, and murder. And yet David seemed totally oblivious to any of this. For your convenience, here is an overview of David’s recent actions, for which he showed no sign of guilt:

The incredible thing about David’s state of mind after all of this, is that a made up story about one man butchering another man’s sheep enraged him enough to pronounce: “As the Lord lives, surely the man who has done this deserves to die (2 Samuel 12:5).”

Adultery and murder were one thing, but the idea that a poor man’s beloved sheep might be butchered and eaten by his neighbor was simply too much to bear. In this way, I believe our society is a lot like David was in 2 Samuel 12.

Every day we legally put an end to thousands of precious human lives in their mother’s wombs, and millions of people see no problem with this. On the other hand, a U.S. felony conviction for “possession, sale, purchase, barter, offer to sell, purchase or barter, transport, export or import, of any bald or golden eagle, alive or dead, including any part, nest, or egg,” will result in a fine of up to $250,000 or two years in prison.

The law protects an eagle’s egg, but not an unborn child. What rationale could possibly justify this discrepancy?

Someone might suggest that it is important to protect the eagle because it is endangered, while humans are not. This is to suggest that the worth of a human life is inversely proportional to how many humans are currently alive. Surely human worth and dignity are not determined by “how many of us there are.”

Or maybe the eagle is important to the ongoing health of our ecosystem, while another human is not. This is to suggest that a human’s worth is based on their utilitarian value. Have we really come to believe that if a human is not really necessary to the preservation of our own comfort, then they no longer have any worth? Do we really want to live in a world where people only dignify each others’ existence to the degree that they find it personally useful?

Of course, eagles are only one example among thousands that reflect our cultural understanding of the worth and dignity of animals. Just as abortion is only one way among many that we undermine the much greater worth and dignity invested in human beings. What an incredible state we find ourselves in when we are willing to treat human lives in a way that evokes our outrage when applied to animals.

Yes, it is natural to feel affection for cute, fury creatures. And yes, it is right to go to great lengths to preserve the pristine dignity and beauty of God’s natural creation. But do not neglect your fellow man, woman, or child, born or unborn, “useful” or “not useful,” in the process. He or she was made in the image of God.

For the record, the story about the sheep brought David to his senses. Will we come to ours? 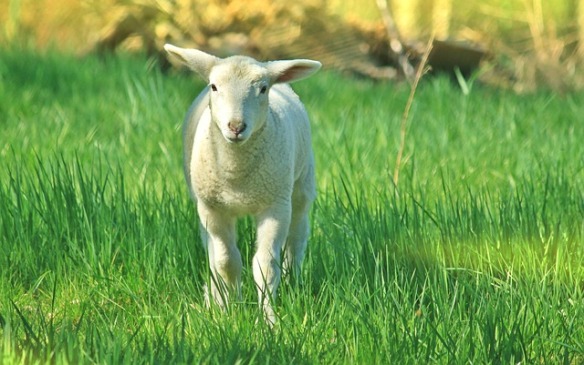