There are many manmade adaptations of the true Biblical gospel, and some of them are quite popular today. Among these false gospels is one, often referred to as the “prosperity gospel,” which basically teaches that if you follow Jesus, He will bless you with financial, social, and physical wellbeing. The idea is that if you will follow God the way He wants, He will give you all of the earthly blessings you desire.

This prosperity gospel is completely incompatible with scripture itself. Many have spoken out against it in no uncertain terms, insisting that in fact life often becomes harder, rather than easier, when we follow Jesus.

In some sense there is truth to the idea that following Jesus makes life harder. Look at the life of Paul as a prime example. He was a promising Jewish Pharisee with a bright future as a leader of the people, yet when he gave his life to Jesus, he traded all of that for a life full of beatings, stonings, shipwrecks, imprisonments, and all manner of hardship.

But let us make sure that we do not overreact to the prosperity gospel so extremely that we insist that following Christ is worse than it actually is! Paul, even after all he went through, stated plainly that he was happy about his decision to follow Jesus. In the ways that mattered most, following Jesus still made his life better, not worse.

“If anyone else has a mind to put confidence in the flesh, I far more: circumcised the eighth day, of the nation of Israel, of the tribe of Benjamin, a Hebrew of Hebrews; as to the Law, a Pharisee; as to zeal, a persecutor of the church; as to the righteousness which is in the Law, found blameless. But whatever things were gain to me, those things I have counted as loss for the sake of Christ. More than that, I count all things to be loss in view of the surpassing value of knowing Christ Jesus my Lord, for whom I have suffered the loss of all things, and count them but rubbish so that I may gain Christ.” (Philippians 3)

I would argue that the quality of Paul’s life did not go down, but rather it went up as a result of his dedication to Christ. He may have given up a lot, but he would do it all again in a heartbeat, for what he has gained is something of “surpassing value.”

Did not Jesus Himself say “I came that they may have life, and have it abundantly”?

Maybe there is some truth in the prosperity gospel after all… Not because God will make our way prosperous from a worldly standpoint in terms of material health or wealth, but because God will indeed teach us to prosper in our souls.

In his third epistle, John stated: “Beloved, I pray that in all respects you may prosper and be in good health, just as your soul prospers.”

In 2 Corinthians Paul said: “though our outer man is decaying, yet our inner man is being renewed day by day.”

Will following God make you physically healthy and materially wealthy? It might. Or it might not. But what we do know, is that following God is the pathway to a prospering soul, full of the fruits of the Spirit.

“Better a little with the fear of the Lord
Than great wealth with turmoil.
Better a small serving of vegetables with love
Than a fattened calf with hatred.”
(Proverbs 15:16-17)

Our Bibles contain a good deal of ancient history, especially concerning the Israelites. When reading the Old Testament we can learn not only about the customs, technologies, art, and warfare of this ancient people, but also about their intimate relationship with the LORD.

What we find is that the Israelites, over the course of the centuries, fell away from God time after time. If there was a way to go wrong, the Israelites would manage to find it. Because of this, their story gives us hope that God will be as patient with us and with our friends and family as He was with the people of Israel. It also gives us many examples of what not to do if we want to prosper and have joy in the LORD.

Here are three broad categories of unfaithfulness that we see Israel exhibiting. By examining where they went wrong, we can better be on the alert against troubles that might find their way into our own lives if we are not watchful.

1) Being too cowardly to even try to follow God’s leadership.
2) Becoming just like everyone around us.
3) Forgetting God in the midst of our prosperity.

Consider these categories of unfaithfulness in more detail:

Being too cowardly to even try to follow God’s leadership:

God told the children of Israel to go into the land of Canaan and to take it by force. He would fight for them to give them a land flowing with milk and honey. But the people, when they analyzed this task for themselves, decided that it was just too hard, and decided it was better not to try than to try and fail.

What commands has God given, or what direction does He lead, that you are too scared to follow? Find courage to follow where He leads, or you will die in the wilderness for your rebellion.

Eventually the children of Israel did go into Canaan to take it for themselves. Many of them were courageous in following God into battle and claiming their inheritance. But many others were half-hearted about this task. They drove out some of their enemies, but they left others to live in the land. It was not long before they found themselves worshipping the sun, moon, and stars, practicing cult prostitution, sacrificing their children to Moloch, and doing all kinds of detestable things. They may have claimed to still follow the LORD as well, but their loyalties were obviously divided.

What worldly practices have you allowed to maintain a stronghold in your life? We may insist on calling America a “Christian nation,” but we must be careful to recognize that much that goes on here is anything but Christian. We must not cheapen the name of Christ by wearing it while living like everyone else.

Forgetting God in the midst of our prosperity:

God warned Israel repeatedly that they must not forget Him when times of comfort and prosperity came. They would enjoy nice houses and beautiful vineyards and large flocks and herds. Many of them would forget God in these times and feel that it was their own strength by which they had acquired their wealth.

In the age of advanced technology, modern medicine, and socioeconomic mobility, we may feel that the answer to all of life’s questions is to work harder, be smarter, and then sit back and enjoy the results of our own efforts. Science will save us. Money will fill the holes in our lives. Comfort is the ultimate goal. But we must not forget that without God, we have nothing.

Jeremiah 29:11 is one of the most loved and quoted Bible verses of our time. Personally, I cannot remember ever attending a high school or college graduation at which this verse was not read aloud:

“‘For I know the plans that I have for you,’ declares the LORD, ‘plans for welfare and not for calamity to give you a future and a hope.’” 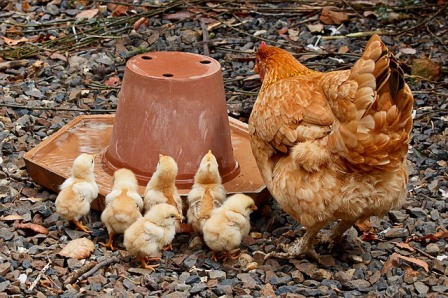 Perhaps that desire for security is also behind the popular teaching of “once saved always saved,” often used to offer the Christian the false hope that a brief experience of accepting Jesus at one point in time guarantees us a spot in heaven no matter what we do afterwards.

It is not physical security that God offers, and neither is it the logic-defying proposition that we can somehow go to heaven even as we reject the God who illuminates it.

Rather, God offers us the security of knowing that no one and nothing can separate His love from those who would walk in it.

“If God is for us, who is against us? He who did not spare His own Son, but delivered Him over for us all, how will He not also with Him freely give us all things?…

Who will separate us from the love of Christ? Will tribulation, or distress, or persecution, or famine, or nakedness, or peril, or sword?…

But in all these things we overwhelmingly conquer through Him who loved us. For I am convinced that neither death, nor life, nor angels, nor principalities, nor things present, nor things to come, nor powers, nor height, nor depth, nor any other created thing, will be able to separate us from the love of God, which is in Christ Jesus our Lord.” – Romans 8:31-39

As Jesus states in His message to the church in Philadelphia in Revelation 3:8, “I have put before you an open door which no one can shut.”

The door of salvation is open before us, and no one and nothing will shut it. The question that remains is this: will you walk through that door, and abide inside with God?